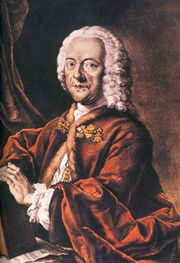 Georg Philipp Telemann was a German Baroque composer and multi-instrumentalist. Almost completely self-taught in music, he became a composer against his family's wishes. After studying in Magdeburg, Zellerfeld, and Hildesheim, Telemann entered the University of Leipzig to study law, but eventually settled on a career in music. He held important positions in Leipzig, Sorau, Eisenach, and Frankfurt before settling in Hamburg in 1721, where he became musical director of that city's five main churches.

Return to the List of the Classical Composers
◄ Previous Composer: Tegner Alice